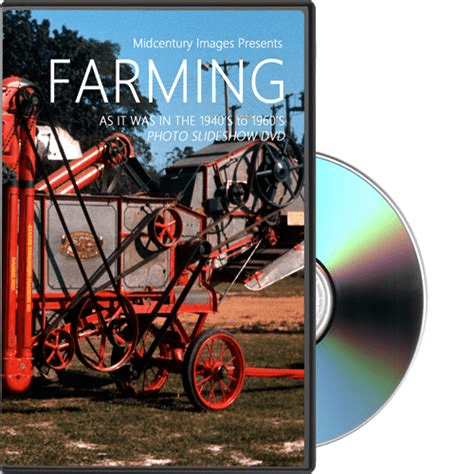 As the war progressed, farmers were being asked to produce much more food with fewer and fewer workers. More and more young men were being drafted or enlisted in the military. The farm labor shortage quickly became severe, especially for fruit and vegetable producers who relied on migratory hand labor.

In the course of the war, 15 million men and women were called up into the military. At the time, the entire workforce consisted of only 73 million people. Over 20 percent of the pre-war workforce were now in the military, not working at their civilian jobs. The nation needed new ways to get the work done.

In the factories that meant opportunities for women and for minority populations who had been out of the workforce before. Defense plants were recruiting and offering high salaries, and many of the new workers came from the farms.

All of those forces put the squeeze on farming – one of the largest employers in the economy before the war. Farmers coped, first by putting their wives and kids to work.

Kelly Holthus (right) was one of the kids who got “put on a tractor when I was about 11 years old” to help meet the labor shortage. He was very proud of being able to contribute to the war effort.

Farmers and Ag organizations from across the country complained about labor shortages, and Congress responded by enacting draft deferments for farmers and farm workers who were “necessary to and regularly engaged in an agricultural occupation.” But the exodus of workers had already begun.

Holly Miller’s brother was one of those who got a farm deferment. “The neighbors had been down to the draft board,” Holly says, “and asked them not to send him because they felt that he was doing more good for them [here] than if he went into the service. And that was probably true because they were really short-handed.”

Later, the government even allowed German and Italian prisoners of war (POWs) to be used as farm labor in the Midwest.

But ultimately, the severe shortage of farm labor could only be met by making individual farmers more efficient and productive. So, even in the middle of the war, farm equipment manufacturers were improving their tractors and implements. This is a story of major technological innovation. And despite rationing of raw materials for farm equipment farmers began to buy new technology.

After the war, most of the hired hands didn’t return to the farm. But at that point, there were few farmers willing to go back to their old labor-intensive methods. The government maintained price supports in order to avoid a post-war farm recession – like the one that happened after World War I – and so farmers took their increased incomes and bought machines so they didn’t have to rely on hired hands as much.

Written by Bill Ganzel, the Ganzel Group. A partial bibliography of sources is here.