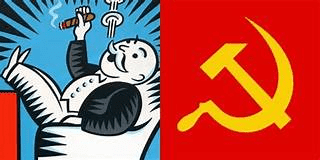 Almost everyone is familiar with the word capitalism. In the current era of a competitive economy, the capitalist system has gained a foothold all over the world, The idea of capitalism stands as the driving force of the world’s free market economy.

However, many have little idea about the fundamentals of capitalist society. What is the basis of this social system and where its challenges are? It is very important for the citizens to have an idea about the answers to these questions. But know-

We use a lot of things in daily life. After waking up in the morning you need toothpaste or toothbrush, you need to go to office or school or college, you need different types of vehicles, you need food to survive, you need clothes, you need home, you need television for entertainment, you need mobile phone or computer for communication.

Those with capital are called bourgeois or capitalists. And those who have no capital, those who are poor, they work hard to accumulate the land of the bourgeoisie, the mills, the mines. At the end of the month, they have to be satisfied with a small salary. This working class is called the proletariat. They have no capital other than the power to give labor. That is why this class of people is always on the verge of exploitation in the capitalist society .

Private ownership of production machinery is recognized, almost everywhere. As a result, competition in the market increases. Capitalist businessmen increase their capital by making more profit. The key is to produce good products at low prices and deliver them to the buyers. This will increase sales, as well as a lot of profit. The product you get from me for 10 dollars, if someone else sells the same type and the same quality finished product for 12 dollars, you will surely buy the product from me! This is how the competition goes.

Capitalists call on scientists to come up with new techniques or ways to reduce the cost of production and increase quality. In this way, the quality of service constantly increases. Behind capitalism are terrible evils that pose difficult questions for humanity.

First, capitalists take advantage of capitalism to build mountains of wealth, but most people in society become poor. There are specific reasons behind this. As a result of competition in production, those who have little capital cannot survive in the market. As a result, they soon lost their capital and joined the proletariat, becoming poor. Thus, as a result of the ever-increasing competition, the number of the poor in society increases, those who have a lot of capital, they survive as the richest class of society.

Second, the recurrence of the business crisis in the capitalist society. The only goal of capitalists is to “profit” from the products they produce. They can’t think of anything else but profit. But as the number of poor people in society continues to increase due to the increasing spread of capitalism, the purchasing power of the people decreases. As a result, capitalists cannot sell the products they produce. Helpless people die without food on the one hand, but they do not care Communism vs. Capitalism.

Food and clothes are wasted while poor people die due to the lack of food and clothing. No matter how humane the appeal is, capitalist traders do not sell goods unless they get a fair price. Such a situation is called the “business crisis”, which is a effect of the capitalist system. The 1930s saw a terrible business crisis in the United States. In Charlie Chaplin’s Modern Times, we see a reflection of the miserable human social life of that time.

Third, the alarming rise of luxury in the capitalist society. The owners of capital continue to make so much profit that the amount of their wealth swells. So in times of business crisis when they can’t invest in new products, they indulge in luxury. In the 1930s, when the majority of people were starving, the luxury carmaker Austin recorded sales of their cars at that time, because the affluent did not reinvest their capital or come forward with the help of humanity, which is why Austin’s sales multiplied.

Fourth, rural cottage industries and culture are destroyed due to capitalism. Once upon a time in the villages of our country our own folk songs and dances were prevalent. All the girls and boys of the village used to sing and dance at weddings, festivals, and festivals. These are an integral and intangible part of the main tradition. But nowadays in the rural society also digital instruments have taken place, today DJ songs, nude dances have taken the seats of those festivals.

As a result of the spread of capitalism, rural culture is being destroyed. The same applies to the rural cottage industry, where bamboo, cane baskets, shapes, baskets, lids are being replaced by comparatively cheap plastic products. All this is threatening folk heritage Communism vs. Capitalism.

Due to the capitalist society and state system, the wealth of the whole world is in the hands of a few people, a large part of the society is a victim of poverty and oppression. The wealth of the capitalists is increasing, while many people are starving to death. Is this the final result of capitalism? Is it at all possible to get over this? Only time will tell.

Communism is a political and economic ideology without class, without exploitation, without individual ownership. Where all means of production and natural resources (land, mines, factories) are owned and controlled by the state in place of private ownership. Communism is an advanced and exalted form of socialism. The differences between them have long been debated.

The main goal of both is to bring an end to the capitalist financial system, a tool of exploitation of private ownership, and the working class.

The ideology put forward by Karl Marx, communism is the ultimate peak of society. Where, economic equality must be established in society through revolution, if productivity increases during that transition, goods, and services will be abundant in society. If there is communism in any country, there will be no gap between rich and poor. The government will take the responsibility to ensure the basic rights of the citizens.

Communism is a well-organized society with a high level of independent, socially conscious working people, in which the self-government of all will be established. In that society, labor will become the main essential need for the welfare of the society and everyone will realize this need. Everyone’s ability is devoted to the maximum welfare of the people. Communism gives the individual extensive social freedom.

It includes the right to be elected to commune organizations and to participate in the administration of society, The right to education, rest, recreation and leave; Opportunities for creative work in all areas of material and cultural production. Communism helps the individual to make active contributions to science and art, including the opportunity to enjoy all cultural fruits.