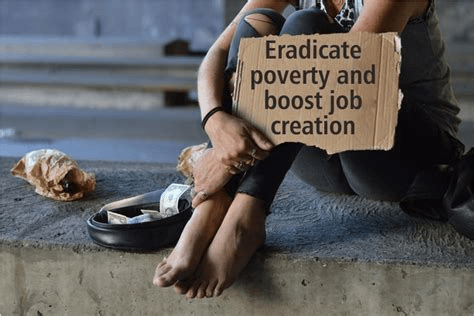 Set a goal, like China did. We will lift our poor people out of poverty in the next 40 years. This is one of the greatest stories in human history. China has lifted 850 million people out of poverty and still counting. Their model can be copied by other nations wishing to have their poor populations thrive and relieve the state of those burdens.

The key to poverty eradication is inclusive growth between innovative governments and the poor. The real secret behind China’s economic miracle was “directed improvisation”. Local policy experimentation guided by central government goals, directives and guidelines.

The central government in China balanced between control that was too loose and control that was too tight so be flexible. The central government issued three types of directives.  One clearly prohibited local governments from doing some things. Another type of directive clearly mandated that all local governments had to do certain things. The third type specified objectives were deliberately vague about how to accomplish the objective and made it clear innovation was allowed but, did not specify exactly what that was.

This created a space in which local governments could create their own innovations and they made attempts that the central government might have never thought of. This allowed the central government space to pull back if things were headed in bad directions. Central to China’s thinking was the ability to creep the design space incrementally towards a capital market system. These organizational and institutional forms created on this path were uniquely mixed.  These allowed much of the functionality and dynamism of a market economy.

Directed improvisation is a hybrid management model that combines top down direction with bottom up improvisation. In this model, the role of leadership was to guide and incentivize adaptive responses within the parties, rather than dictate precise plans, whereas the role of local officials was to devise local solutions to local problems. This model formed the foundation of China’s highly adaptive mode of development, enabling the state to respond to challenges of development that evolved over time and across diverse regions.

This environment empowered local officials to deploy whatever resources they had to solve problems at hand. Development followed this three-step sequence, which unfolded at different rates across different regions. The “fake it till you make it” slogan was a way to visualize the work of art ahead of its completion.

The emphasis needs to be on female education and gender equity in compensation. When you can read you can find more sustainable employment or you can even start your own business. Reading enriches the learning of life. Women having equal access to education, participate fully in business and economic decision-making. Gender equality raises household incomes and greater well being of children and future generations is one driving force against poverty.

Is one of the best pathways out of poverty a well-paying job or is it having a sustainable business?  Either will get you out of poverty.

Invest in job creation strategies such as building or rebuilding infrastructure like bridges and roads to new employment. Develop renewable energy sources and lower the cost of energy for locals. Renovate and retrofit housing for low energy use. Make common-sense investments that revitalize older neighborhoods where many of the poor live.

Expand low cost broadband internet access that protects intellectual property rights of users to create a level playing field for the impoverished. They need internet access and affordable energy to succeed. Most of the rural poor depend on agriculture or other natural resources for their livelihood these must have local protections, not privatization. Invest in and implement agricultural programs that help local farmers manage their own resources.

When people have jobs, they have income and when people have income, they can more easily get themselves out of poverty. They need a hand up from governments not a hand out. Unemployment and underemployment lies at the core of poverty. Labor is often the only asset the poor have to improve their well being.  Focus efforts to create jobs for the youth. Young people are three times more likely to be unemployed than adults. Develop strategies to eradicate poverty through youth employment and promote entrepreneurship. Tackle poverty by promoting job creation and entrepreneurship policies.

Governments need to provide all people with access to basic social services including education, health care, adequate food, sanitation, shelter and clean water. And, distant regions also need access to these social services and health care that is not privatized. Universal health care in all countries can help achieve a goal of ending extreme poverty.

As poverty is eradicated so to the possibility of out of control pandemics, famine and other crisis that could catch the world unprepared. China has achieved substantial development success in eradication of poverty. It is now an upper middle income country. This has increased its contribution to the global public good. Since China began to open up and reformed its economy in 1978, GDP growth has averaged almost 10 percent a year, and more than 850 million people have been lifted out of poverty, a staggering accomplishment.

Increase low to no interest micro financing as defined as the supply of loans, savings, and other basic financial services to the poor. Lower the barriers and simplify how a business starts up. Use microfinance for people who are unemployed, needing a hand up not a hand out or who have very low income. They could get a small business loans to help them become self-sufficient and increase employment opportunities for others. Low or no interest microfinance is a promising way to alleviate poverty.

The United States hasn’t raised the federal minimum wage since 2007. A full-time worker with two children earning the minimum wage still raises his or her family in poverty.  One could say the countries who leave wages low only promote poverty. This is an issue in almost every other country, especially in developing nations. Raising the minimum wage could potentially increase the health and well being of many people by lifting millions out of poverty.

Four days is more than enough for full time employment and the other three days are for enjoying life. Those three days in between will feel like a holiday and create more jobs in many other industries like leisure and recreation. It has proven results in boosting better productivity and growth in those industries who have tried the four day work week.

Start with student loans, personal and medical debt forgiveness. Lift those burdens from people and communities and let there be reparation for the injured indigenous people and the once enslaved.

Nations need to adopt Bitcoin as its new digital currency the one that gives meaningful sovereignty to the end user and lessen inequality. To learn more about Jubilee Day:  https://michael-hudson.com/

Those interested in large scale poverty reduction should seek to understand what drives sustained economic growth. When systems collaborate and act on optimum development strategies the poor thrive.

The key is to have local people and communities improvise and brainstorm their best solutions for their community, under the guidance of their government.

When the poor build the progress that they seek, one will always support that which they help to create. This brilliant guidance by government is a great leap forward for both them and the once poor. The poor become productive instead of a burden, a win-win for the government and the poor. Thumbs up for community input and the peaceful rise of the world’s poor.

9.  What Not To Do: Outsource Jobs

The Bush Republican Party and Chamber of Commerce gave large tax incentives to businesses and industries to move their operations anywhere, just not in the USA. Millions lost jobs! This was done to drive employee wages down, in a race to the bottom that has moved nearly half of the USA population into poverty. The Bush Republican policies on outsourcing hurt American families and the economy and left us with the worst American jobs record since the Great Depression, such a greedy keepsake to be left with. Now, they need only follow the Best Ways to Eradicate Poverty to right this wrong.